Home
Compare
Leatherman Surge VS Wave: Which One Should You Pick?

It was the year 1983 when Tim Leatherman sold his first Pocket Survival Tool. This event marks the beginning of a new era in the world of multi-tools. Thanks to the immediate success of that product, Tim Leatherman’s company stayed in the business, subsequently becoming a true industry leader.

Rewind to 2018 and Leatherman is a company that manufactures all sorts of different multi-tools. There are literally dozens of different products in Leatherman’s collection, including multi-tools for everyday use, but also those designed for certain activities like hiking, hunting, fishing, and so on.

All of those products have one thing in common – they’re all built to last for a long time. Leatherman is a US-based company that achieved their fame by making multi-tools that do not break easily. In fact, buying a Leatherman-made multi-tool means that you won’t need to get another one in years, perhaps even decades. 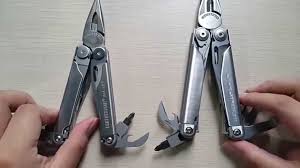 Apart from sturdiness and durability, Leatherman multi-tools are also famous for the number of different functions they come with. Sure, how useful a multi-tool is gonna depends on your needs and preferences. But, there are two models that seem to be everyone’s favorite. We’re talking about Leatherman Surge and Leatherman Wave. So, which one would we pick if we had to choose only one? To find out which one is better, let’s compare Leatherman Surge and Wave!

Leatherman Surge – 21 tools in one.

This multi-tool comes with all sorts of tools you will find useful in everyday life. Some of those include XL scissors, two knives, a can opener, a bottle opener, and so on. There are also some tools used for repair work, e.g. pliers, wire cutters, electrical crimper, wire stripper, and so on.

Leatherman Wave – 16 tools in one

One of the reasons why the Wave is the most popular product from Leatherman’s collection is that it comes with all the functions that average users need. Leatherman didn’t want to overload it with tools which would just take space without actually meaning much to the user. Therefore, despite having fewer functions than Surge, Wave is more convenient to use. It’s also much easier to carry, as its weight is about 4oz lighter than the weight of Surge.

Special Features that Stand Out

Here’s a special feature that not many other multi-tools have. Basically, it allows you to swap the default blades with some other blades you find more useful. For example, you can place a metal saw blade in the place of the wood saw blade.

According to the manufacturer itself, the Wave has the most comfortable handles ever to come out of Leatherman’s factories. The handles are smooth and ergonomically designed to feel good in the hand.

Awesome Features Both Multi-Tools Have

One of the best things about these multi-tools is that some of their features can be used even when they’re folded. Furthermore, in order to open a feature, you need only one hand, which is something that greatly adds to its functionality.

Both multi-tools are designed with user safety in mind. Therefore, both have a locking feature for each tool which keeps it folded until you decide otherwise. What this means is that there’s no chance a blade would unfold while you’re keeping the multi-tool in your pocket.

Both Surge and Wave are made of 420HC stainless steel, a material that’s almost impossible to break. What this means is that both multi-tools have a very long expectancy. In fact, the manufacturer is so certain that there gonna work fine for ages, which is why Leatherman is giving a 25-year warranty on these multi-tools.

Leatherman Surge vs Wave – Which One to Buy?

Although they’re similar in terms of features, there are some significant differences between Surge and wave which could affect your decision. First of all, the fact is that when it comes to functionality Surge is a clear winner. It’s no surprise, as this multi-tool has five more functions than Wave.

But, because it comes with more tools, Surge is also larger and heavier than its rival. And that means that Wave is much easier to handle, as well as to carry in a pocket. Moreover, Wave was designed with user comfort in mind, which is why it comes with ergonomically-designed handles. Another thing going in favor of Wave is that it’s slightly cheaper. But, the difference in the price is pretty small, so our advice is not to let it play a big role.

As you can see for yourself, both multi-tools have their own perks, so we simply can’t separate them. You are the one who needs to make the final decision, based on your needs and preferences. And if you can’t make up your mind, our advice is to buy both of them!

We use cookies to ensure that we give you the best experience on our website. If you continue to use this site we will assume that you are happy with it.Ok