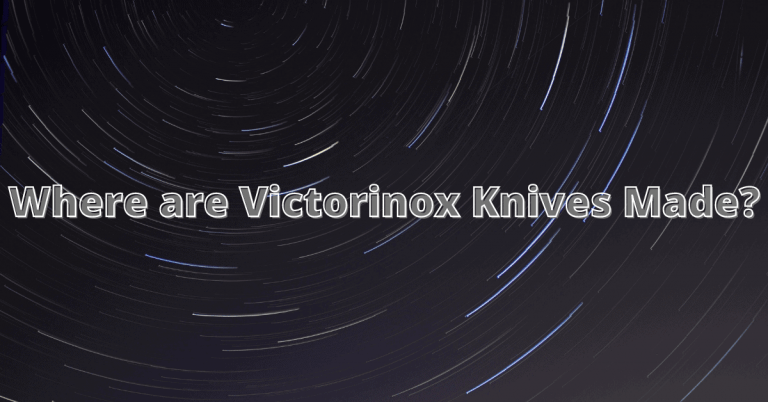 Victorinox has been crafting magnificent blades for several past decades. Most of these knives and multi-tools are military-grade and were branded as “Swiss Army Knife” by US troops. These blades have been honed for their unparalleled quality, versatility, and durability. You might wonder, where are Victorinox knives made? Well, wonder no more, for we bring you a complete rundown of the products’ manufacturing and uses.

The knife possesses a main spear-point blade, and comes equipped with several auxiliary tools. These tools include screwdrivers, can openers, mini scissors, and so on. A specialized folding mechanism keeps these tools stowed within the handle of these knives. The handle was traditionally colored red, but in recent times, multiple colors and textures have appeared. The handle also bears the Victorinox “cross” symbol, or the Swiss coat of arms for the Switzerland army.

The Swiss Army decided to acquire certain foldable knives from Germany in the 1880s. These knives could serve their soldiers in multiple contexts such as opening canned foods and disassembling their rifles for cleaning. At that point in history, Switzerland lacked the resources and set-up to produce those knives on their own.

This, however, changed in 1891, when a company named Karl Elsener, the future Victorinox, took charge of manufacturing the knives in Switzerland. Initially, the company held the monopoly but was soon rivaled by another enterprise named Paul Boéchat & Cie, the future Wegner Company. The two titans split up the manufacturing quotas until 2005, when Victorinox absorbed Wegner under its sway.

Where are Victorinox Knives Made Now?

Victorinox hails from Ibach, Switzerland, while the Wegner Company was housed in Delemont. After the merging of the two companies, Wegner retained its title and brand but this was changed in 2013. Ever since then, Victorinox is the sole provider (brand-wise) of the knives. The manufacturing, as the name of the knife suggests, takes place in Switzerland.

The knives are sold mostly to the Swiss Army, with their coat of arms emblazoned on the handle instead of the Victorinox logo, or exported to the US for military use. The company has a mass following in the USA and is regionally headquartered in Monroe, Connecticut. As of yet, Victorinox remains one of the biggest army knife exporters to the USA, and has been declared as a hallmark of quality.

What Makes Victorinox Knives So Unique?

Why are these knives/multi-tools such a big deal? The Swiss army knife is among the handful defining products of Switzerland. The knife is a symbol of the Swiss nation and has been branded as a tool for all situations. Originally designed and marketed for military use, the knives have found great utility in domestic context too. They are also considered quintessential “survivor” gear.

Victorinox knives represent the Swiss nation and its long history in producing some of the finest military orders and equipment. Standing parallel to the Swiss Guard that has been guarding the Pope for centuries, this knife represents the military might and versatility of the nation.