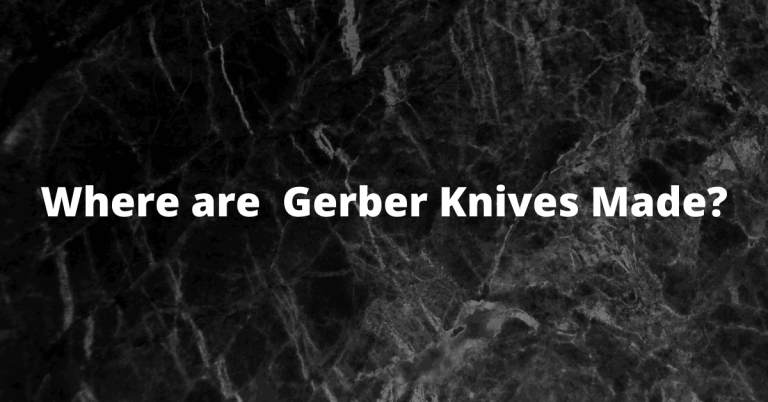 Gerber is a famous multi-tool brand, manufactured by Gerber Legendary Blades. Like all multi-tools, the Gerber products are primarily a knife with assorted tools embedded within the handle. These tools can be brought outside by a simple folding/unfolding mechanism or simply by sliding in case of pliers. The company has also produced military-grade knives, being used by the US armed forces. So where are Gerber knives made? Let’s dive in and explore:

Gerber Legendary Blades Company hails from Portland, Oregon, USA. It is a corporation based in America, and was acquired by another corporate titan, a Finish enterprise named Fiskars in 1986. The company has been operating ever since under the umbrella of its patron but has retained its brand and identity.

The company, named after its founder Pete Gerber, started producing these military-grade knives in 1939. The startup was initially inclined towards the production of kitchen knives but soon began mass-producing high tech army knives too. It was from here that the company basked in the limelight and rose to fame.

The US army became the number one client of the company, however, its products were and still are exported almost worldwide. Today they stand proudly as the second biggest multi-tool manufacturers in the world, second only to the rival Leatherman Company.

Are All Gerber Knives Made in America?

As noted earlier, Gerber is an America-based company, operating under Finnish patrons who acquired it in 1986. However, in recent years, the company has outsourced a huge chunk of its manufacturing to other countries, mainly China. This outsourcing has become the norm in American corporations owing to the economic problems that prevail due to the mismanagement of the country’s assets.

China, which has appeared as a major economic titan, has claimed several outsourcing projects, including Gerber. Around 21.8% of the products showcased by the company are being manufactured in the USA. While most of the others are being produced in China. The hope persists with this fraction that Gerber will not shut down its operations in America.

Some Chinese made models include Sharkbelly, Strongarm, and Torch I & II serrated knives. While the American models, which are highlighted on their website with the state flag of Oregon, are also very impressive. These include the Ghoststrike Tactical Knife, LMF II Survival Knife, Gator Premium, and similar high tier models.

What Sets the Gerber Multi-tools Apart?

Gerber is the biggest supplier of military-grade knives to the US army. This level of trust can be accredited to the durability, versatility, and innovation of their models. They also boast several tool combinations, ranging from a mundane screwdriver accessory to demolition detonator chips. Moreover, the sliding Sage-T-Loc system keeps the accessories safely housed inside the tool’s handle.

The myriad of features boasted by the models have set the company apart. Although, to some, the outsourcing part may seem like a hard pill to swallow, there is a silver lining. Chinese manufactured products are comparatively cheaper. The company is truly a hallmark of success and brilliance.